LANDSDOWN.... IS THIS WHAT YOU WANTED? 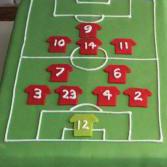