The Pearson Debate - Something Not Mentioned Yet… 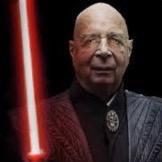